The Centre for Urban Ecology and Sustainability (CUES) envisages to address urban ecological issues with a view to offer solutions, and to develop a skilled cohort of professionals who actively engage in and find solutions for urban ecological challenges. The Centre would serve as a focal point where scientists, locals, government agencies and private consultants converge and participate in the planning, implementation, and evaluation of sustainable environmental projects in cities. The Centre will collaborate with Schools and other Centres in AUD on areas of common interest, and will build linkages with academic programmes within the University to provide opportunities to students to foster engaged scholarship. It is expected that its programmes will host interactions and dialogues on common themes with other Universities, government and civil society organisations in the city.

To become a global centre for excellence in Urban Ecology, with a view to contribute to the long-term sustainability of cities.

To work towards the creation of sustainable cities and enhancing the quality of urban spaces to benefit present and future generations with learnings from experiences gained by engaging with the city of Delhi. 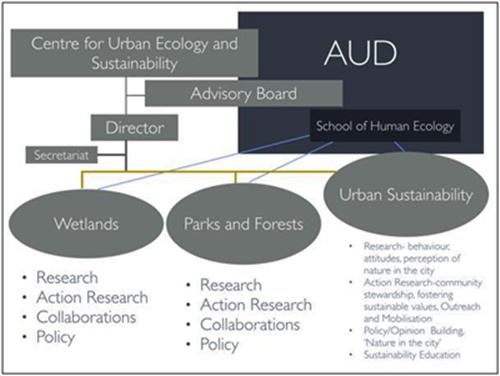 Delhi has had a history of several small and large water bodies. These water bodies, also known as wetlands, serve as important ecologically functional units whose services are critical to the proper and sustained functioning of the city’s ecosystem. Yet, wetlands in the city today face the risk of being decimated as a result of mismanagement of waste water, and the growing pressure on them to make way for development projects. Out of the 600 wetlands recorded in the Capital, 274 have already dried up and as many as 190 have been lost forever and cannot be revived. The ones that survive are in a terrible state with raw sewage inflows and pollution loads. In such a scenario, possible interventions would involve rejuvenation, restoration and conservation of Delhi’s existing wetlands. The Wetlands Programme of the Centre will actively undertake action research on urban wetlands with a view to enhance their ecological character and ensure their long-term sustainability.

The national capital of the country has the highest proportion of urban population in the country. The city also has numerous parks and forests, a majority of which constitutes the Delhi Ridge. In a city like Delhi where there is immense potential for high levels of air pollution, forests and other green spaces act as sinks for CO2 and other gas emissions. Besides, urban forests provide habitat to a variety of flora and fauna, many of which have established niches exclusively in urban ecosystems. Developmental activities and the resultant loss and fragmentation of green spaces, coupled with both deliberate and inadvertent conversions of green spaces are some of the issues that the city is faced with. The Parks and Forests Programme of the Centre aims at undertaking research of urban parks/ forests in an effort to understand concerns over their future. There will be emphasis on employing ecologically sound interventions that benefit both, the human and non-human components of urban landscapes.

The concept of urban sustainability envisions a city that is capable of running on renewable sources of energy, produced within the city and has minimal dependence on external as well as exhaustive energy sources, along with less import of other resources such as water. It is primarily based on efficient and sustainable use of resources. Its main focus would be on spreading awareness about sustainable cities and fostering sustainable values in urban societies. This programme would sustain most of its activities through volunteerships and citizen science projects. It will feed into and acquire assistance from other programmes of the centre to attain its desired goals.